The Bowling Crew game has an automatic scouring. But even though, it's a good idea to know the fundamentals of keeping score in the sport of bowling. After all, you have to know how to keep score if you want to know what you need to bowl to beat your opponent!

Unlike a real game of bowling that consists of 10 frames, the Bowling Crew game consists of 3 frames, in which a bowler has two chances per frame to knock down all ten pins.

In traditional scoring, one point is scored for each pin that is knocked down.

However, when all ten pins are knocked down with either the first or second bowls of a frame, bonus pins are awarded as follows:

The scoreboard is shown after each bowl. You can open it manually at any time by taping on an arrow on the right-hand side.

Every serious bowler aspires to bowl what is called the Perfect Game.

The maximum score for a single frame is 30 — 10 for the pins actually knocked down in that frame when a strike is bowled, plus 10 pins for the first bowl that follows (which would have to be a strike), and another 10 pins for the second bowl (another strike).

Times this by the 3 frames in a game of bowling and you get the Perfect Game — a 90. This is achieved by bowling 5 consecutive strikes in a single game. You can see how many Perfect Games you've bowled in your profile. 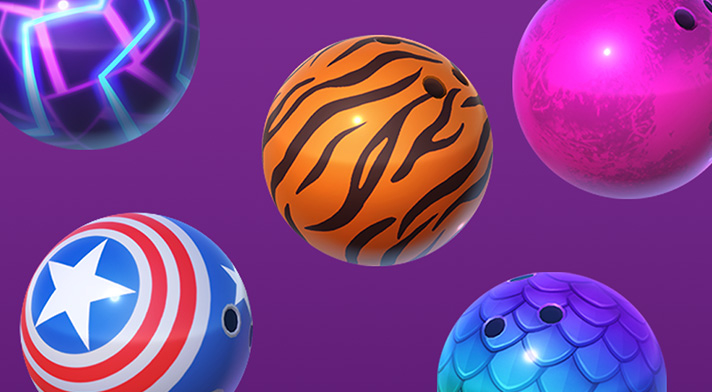 March 4, 2020
Ball types and rarity There are four ball types: Beginner balls. These cannot  be upgraded. You start with these balls. Power balls are the heaviest. These balls are engineered to knock down a large set of pins. Bounce balls are designed to give you a better chance of completing splits. Precise balls are easier to use and weigh less that power balls. These balls are great for knocking down a small group of pins. Their main advantage is their bigger size. Balls have different qualities: Common balls have blue cards. When a new common ball is unlocked, its level is 1. Rare balls have gold cards. When a new rare ball is unlocked, its level is 3. Epic balls have violet cards. When a new epic ball is unlocked, its level is 5. How do I get more balls? Each ball becomes available once you reach certain Alleys. You can check this in the Ball's description (tap on the ball). When you reached a required Alley, you have a chance to get a ball of this Alley's cards by: Unlocking cases that you get for victories; Completing missions; Getting a Crown Case; Taking a Free Item in the Shop (with a chance); Purchasing in the Shop; Ranking in the top 15 of your League When you receive a ball card for the first time, that ball is unlocked. You can get its cards from any case, including cases from lower-level Alleys. Your League adds a permanent bonus to the number of cards you get from cases. The bonus is shown on the League screen. What different ball stats represent? Improving balls will affect two of their stats: Power — the higher it is, the higher level pin you can knock down. Hook Control — the higher it is, the slower the pointer moves on the ball controller. There are two parameters that remain constant with ball upgrades. Guide — the higher it is, the longer the green predict line. Hook — the higher it is, the more intensely a ball can hook. How do I upgrade balls? Balls can be upgraded in the Arsenal. You need chips and ball cards for upgrading. The maximum level is 13 for all balls. If you have enough cards to upgrade a ball, there will be a green arrow pointing up next to the progress bar on the ball. By tapping on the ball, you'll see how many chips are required for the next upgrade. The light gray part is the current value of Power / Guide / Hook / Hook control. The green part is the value after the upgrade. The dark gray part shows the value at the ball's maximum level.   Ball comparison and rearrangement When you start a game, six balls in the ball return system are placed in the exact same order as in your Arsenal. The bowled ball returns to the end of the line. To change the ball in your deck in the Arsenal, pick a new ball from your available balls, tap on it, then tap on the slot where you want to place it. You can compare balls in the Arsenal. Tap on the ball, tap Comparison button, then add another ball to the comparison by tapping on it. Which balls are better? Improving your balls is one of the goals in the game. For a comfortable experience, keep your balls' level no lower than the number of Alley you are playing. For example, if you play on Alley 5 (Asian Drift), make sure your balls are leveled up to at least level 5.
Read more
#Guides

November 11, 2019
DOUBLE: Two consecutive strikes within a single game. FRAME: One of three scoring units constituting a game, each including one or two bowls (two or three in 3rd frame) depending on the number of pins knocked down. (Each game in Bowling Crew consists of 3 frames). GUTTER: One of two trough-shaped structures surrounding a lane to catch errant bowls. HAMBONE: Four consecutive strikes within a single game. LANE: The game's playing surface. OIL: The lubricating conditioner applied to some parts of the lane. The oil zones are marked with blue. OIL PATTERN: The quantitative pattern of distribution of oil on the lane, having a major effect on ball motion. The oil zones are marked with blue. OPEN (FRAME): A frame in which neither a strike nor spare is achieved. PERFECT GAME: FIVE consecutive strikes with a resulting score of 90. POCKET: The area on the pins a bowler aims at to get the best chance of a strike: between pins 1 and 3, or 1 and 2. SPARE: The scoring result for a frame in which the last of the ten pins is/are knocked down on the second bowl of the frame. SPLIT: When two or more pins remain standing with a gap between them, making it very difficult to complete a SPARE. STRIKE: The scoring result for a frame in which all ten pins are knocked down on the first bowl. TURKEY: Three consecutive strikes within a single game.
Read more
#Guides 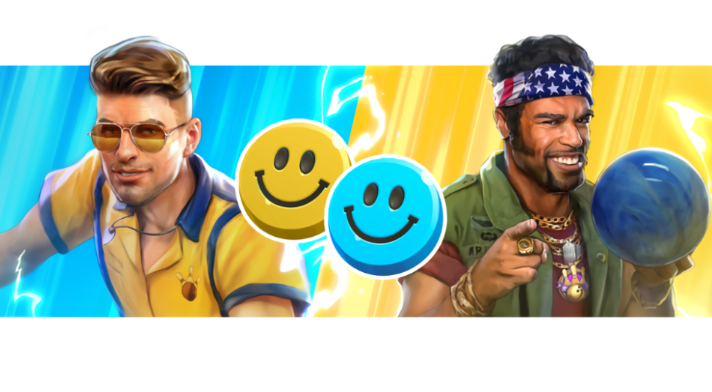 How to play with my friends?

August 3, 2020
Friends To start playing with your friends go to the 'Crew' screen, 'Friends' tab. You could see the list of your friends. There could be three types of players: A person who invited you to the game (in case you've been invited). Players who were invited by you. Players who are your Facebook friends.  If you couldn't see some of your friends in this list, make sure that you and your Facebook friend have granted the app access to your Facebook friend list.   Friend's status In this tab, you can see friends' statuses: Online/Offline/Busy (in a match). Only online friends who are not in a match can be invited. Tap on the 'Play' button right next to the friend's name and start a match.   What do I need to start a match? To invite someone in a match with you, you need special Friendly Match Tickets. Pay with tickets to start a friendly match. If you are out of tickets, you can purchase 1 ticket for gold. A ticket will be taken from the player who is inviting.   How to get tickets? There are two ways to get tickets: Invite new people to the game. Once they install the app, you'll get a ticket. Exchange gifts with your friends on the "Crew" screen in the "Gifts" tab.   You can see how many tickets you have in the Friend's tab of the "Crew" screen.   Sending and accepting an invitation To invite a friend, tap on the "Play" button next to his name. You'll see an Alley selector screen. You can enter any Alley that you have unlocked (no matter which Alley level is unlocked by your friend). Swipe to the sides to change the Alley.  Your friend will be notified which Alley you're going to enter. When you send an invitation, your invitee could accept it or decline.  You can cancel the invitation while it is pending. To do so, tap the "Back" button.   What will happen in case of a cancellation/decline? If your friend declines an invitation, you'll get a ticket back. The same will happen if you cancel the match before it has started. Please mind that if you have no tickets, you pay gold for a ticket, not for a match. And in case the match was cancelled, the inviter will get a ticket back, not gold.    Rewards Complete a certain number of victories in Friendly matches to get this colorful trail. There is a progress bar in the bottom of the friend list showing how many victories has left until you get the reward.
Read more
×
×